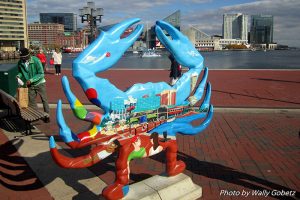 The Chesapeake Bay is widely recognized as a national treasure. The Bay is our region’s greatest natural asset and one of the most productive ecosystems in the world.  The Chesapeake is interwoven into our culture, our history and our modern life – and yet, despite decades of effort, the Chesapeake Bay remains threatened.

Chesapeake Conservancy, bolstered by a grassroots movement of conservation stewards, engaged citizens, and local leaders, is pursuing a vision worthy of the Chesapeake and necessary for its protection: the creation of a U.S. national park unit called the ‘Chesapeake National Recreation Area’ (CNRA).

The CNRA would be an official unit of the National Park System, designed to inspire millions of visitors, residents and the next generation of leaders to become engaged champions for its future.  It will be a 21st-century national park: a collection of existing parks, protected areas and other public lands in the Chesapeake Bay, woven together under the National Park Service banner to protect and bring attention to the Bay’s significant natural, cultural, historical and recreational resources. Formally connected through partnerships between the National Park Service, local communities and states, these lands would become the launching pad for the CNRA and tell a common narrative about the nation’s largest estuary and one of the world’s largest environmental restoration efforts.

CEOs for CNRA is a network of executives leading the call to build business community support for the CNRA.  We are seeking like-minded, visionary leaders to champion the growing effort to secure National Park system unit status for the Chesapeake Bay.

HOW TO HELP – JOIN CEOs FOR CNRA

CEOs for CNRA, working with the Chesapeake Conservancy, is a diverse network of executives leading the call to build support for a CNRA within the business and non-profit community.  We are open to every leader and every organization, big or small, that wants to further the effort to preserve our environment and help bolster our local economies.

There are two ways to help – the first is simply to help spread the word to build momentum and support for the CNRA within the business community.

Secondly, for those interested in getting involved more directly, we are creating a CEOs for CNRA Advisory Council.  If you have interest in becoming a visionary for the CNRA – to join our Advisory Council as a charter member of this growing movement – please contact us directly.

To become a member, please complete the form below.

THE CHESAPEAKE BAY – A NATIONAL TREASURE

The Chesapeake Bay is a national treasure and a resource of international significance. The Bay is the largest estuary in the United States – over time, it has fed multitudes and nurtured a myriad of cultures. The Bay holds about 18 trillion gallons of water; its watershed, which includes 41 million acres of land in six states, is drained by over 124,000 miles of rivers and streams. The Bay watershed is an incredibly complex ecosystem of water and land, creatures and peoples, cultures and economies. It is a region of profound diversity, essential to the cultural and economic vitality of the nation. Home to more than 3,600 species of plants and animals, the Chesapeake Bay is known far beyond its boundaries for its aquatic productivity and harvests of seafood, its cultural diversity and richness, its extensive recreational capacity, and its scenic beauty.

Golden Gate National Recreation Area (GGNRA) doesn’t look like most national parks. It is comprised of disparate tracts of land across many counties.  Stitched across 80,000 acres north and south of the Golden Gate Bridge, these parks also constitute one of the world’s largest national parks in an urban setting. They feature 37 distinct park sites (from Muir Woods National Monument to Fort Point National Historic Site to Alcatraz Island), more than 130 miles of trails, and 1,200 historic structures.  The parallels between GGNRA and the Chesapeake NRA are many, and we want to be the east-coast equivalent to San Francisco’s gem.

By gaining National Park system unit status, the National Park Service’s ability to meet conservation, public access, stewardship and environmental goals for the Chesapeake would be greatly enhanced – as would the ability to access additional federal resources and private matching funds. There are 18 million residents of all walks of life who live near or play on the Chesapeake Bay and who would potentially reap the benefits.

While a CNRA would greatly enhance recreation, tourism and businesses based in the Chesapeake Bay, it would not impose any new regulations or authorities over the region.

The National Park Service would have authority only on the parcels under its ownership in the Chesapeake National Recreation Area.  No land would be acquired without the consent of the landowner. Only those landowners who choose to participate would be directly affected by designation.

Designation of a national recreation area would put our region on par with the nation’s most outstanding nationally significant destinations, bringing exposure to large national and international visitor markets. National park visitors make a significant contribution to the nation’s economy and especially to the gateway communities adjacent to these areas.

The National Park Service reports the 331 million visitors in 2017 spent $18.2 billion in local gateway regions while visiting national parks. This supported 306,000 jobs, $11.9 billion in labor income, $20.3 billion in value added, and $35.8 billion in economic output for the national economy.

As leaders in the business and non-profit worlds, we’ve all made the same choice – the choice to locate our companies, families and/or lives within close proximity to the Chesapeake.  The quality of life and benefits that come from living near such a bountiful natural resource are measurable in some ways and less quantifiable in others – but all are worth improving.

It is well documented, through decades of study and detailed economic analysis, that national parks drive significant benefits to the region in which they are located.

By supporting the establishment of a National Park unit for the Bay, we can bring even more benefit to the communities in which we live.

As mentioned above, Congress has the power to establish National Recreation Areas through specific enabling laws.  In 2020, Governors Larry Hogan of Maryland and Ralph Northam of Virginia called on Congress to draft and approve legislation to establish a Chesapeake National Recreation Area.  In 2021, U.S. Senator Chris Van Hollen and Congressman John Sarbanes (both D-Md.) led a bicameral group of lawmakers and more than 30 regional organizations in forming a Working Group to explore the designation of a Chesapeake National Recreation Area to be managed by the National Park Service.  Efforts are ongoing, both on Capitol Hill and in state houses across the region, to build bipartisan momentum for the establishment of a CNRA with a goal of introducing legislation in the current Congress – which is why generating the support of the business and non-profit community is so critical right now.