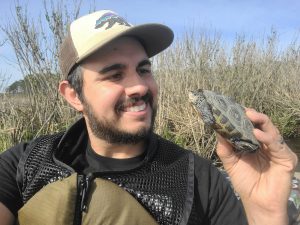 Growing up in Carroll County, Scott spent most of his childhood playing in streams, searching for reptiles and amphibians (with a particular obsession with turtles), reading books about wildlife and watching nature shows like Wild America.  His family would go crabbing around the Chesapeake Bay and explore local parks every weekend it could. Through his involvement in Boy Scouts he would learn valuable outdoor skills and how to serve one’s community, eventually receiving the honor of Eagle Scout.  He sought to pursue an educational path where he could share stories and advocate for issues he felt passionate about so he studied photography, video and graphic design in college, earning a Bachelors of Science in Electronic Media & Film at Towson University.

A few years after graduating he moved to Harford County where he now resides with his wife April and sons, Jude and Dylan, having fallen in love with this region of Maryland due to its incredible diversity of wildlife habitat and species as well its wealth of opportunities for outdoor recreation such as hiking and kayaking. He loves to travel around the country and take roadtrips, especially to enjoy wildlife and our National Parks, but has always felt strongly about protecting local wildlife in our own communities.  Wanting to find ways to contribute to public education and conservation, he served on the board for the Mid-Atlantic Turtle & Tortoise Society, volunteered for various research projects with Maryland Department of Natural Resources and became a Harford County co-coordinator for the Maryland Amphibian & Reptile Atlas Project, a five year survey of the distribution of herp species in the state.  From there Scott wanted to expand his formal knowledge in research and environmental education so he trained to become a Maryland Master Naturalist.

In 2011 Scott helped co-found Susquehannock Wildlife Society as one of the original directors of the then 100% volunteer organization.  From its humble beginnings, he would help lead the organization as its first board president, serving the community and its wildlife through hands on rescues, environmental education, ecotourism events, habitat restoration, conservation efforts, advocacy, and scientific research while using his creative media background to create a variety of engaging video, articles and graphics for the organizations growing social media presence.  Scott is proud to now serve as the Executive Director so he can be dedicated full time to completing the construction and opening of the Wildlife Center while helping to build a successful future for the organization.